Challenging times require imagination and resourcefulness in the art world. All credit therefore to the LARTA 2021 organisers and exhibitors for taking this initiative and compiling such a diverse collection of rugs and textile art, a virtual treat for visitors of all tastes and interests.

My selection of thirty pieces is based entirely on the digital images that have been posted by exhibitors in advance on the LARTA website. My aim was to pick – in much the same way as I would have while wandering anonymously around an actual LARTA fair – items that caught my eye for their visual and material quality or piqued my curiosity. Obviously, they reflect my own taste or interest to a certain extent, but I have tried to look beyond my personal bias, to be ‘blind’ to the ownership of the pieces, so my selection is not balanced between the offerings of the various exhibiting dealers.

My choice comprises a broad range of good and attractive rugs and textiles selected for their aesthetic merit, use of colour, design, or rarity. I would single out two pieces for specific comment. The first is the small fragment of a classical late Ming period Chinese carpet, probably made in Ningxia, with finely woven woollen pile on a cotton foundation. It was apparently once part of the reconstructed and reduced in size carpet that was said to have been used in the Forbidden City by the Dowager Empress Cixi in the years prior to the Boxer Rebellion, and later in the collection of the famed designer Louis Comfort Tiffany and other collectors, which recently sold at auction in New York for a world record price. The second is the rare and attractive Pontremoli gros-point needlework carpet, which was stitched in a West London workshop near Paddington Station in the decade before the Second World War. Such 'pretty' 17th century revival-style floral carpets, with their characteristic pastel colours are perennially popular with decorators.

A visitor's perception of any 'art & antiques' fair, whether actual or virtual, is created not only by the beauty, rarity, material quality, age and value of the material on offer, but is also strongly influenced by its presentation, including the extent and accuracy of labelling, which is perhaps even more important for a virtual event where the exhibitor is not there in person.

THE PICK OF THE FAIR 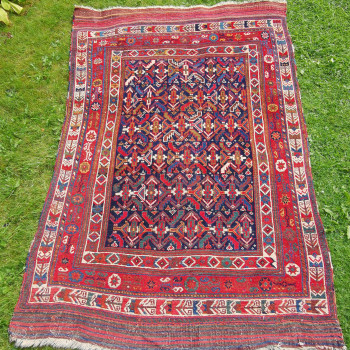 Daniel Shaffer has been involved in the rug and textile world for over 30 years, both as a publisher and collector. He has worked for the editorial department of HALI Magazine in London since 1984 and became Editor from 1995 to 2005. He is now the Executive Editor of HALI, applying his expertise editing, writing and publishing antique carpet and textile art specific material both for the magazine and a variety of books and catalogues. He is a member of the Academic and Publications Committees of the International Conference on Oriental Carpets (ICOC), and in 2010 was awarded the Near Eastern Art Research Center’s Joseph V. McMullan Award for scholarship and stewardship in the field of Islamic carpets. Daniel’s interests as a collector focus on Baluch tribal weaving, but his tastes are eclectic and his knowledge is vast.